If you like to be safe on your mountain bike or motor bike rides, you've probably heard of the brand iXS. If not, we'd like to introduce it to you now. By making great body armor, iXS has been protecting mountain bikers and motorcyclists from serious injuries in crashes for many years, the MTB helmets, full-face helmets, goggles and protectors have proven they're worth their salt on many rides and in various crash tests. With their functional mountain bike clothing, the Swiss company also provides the perfect style for the trail. 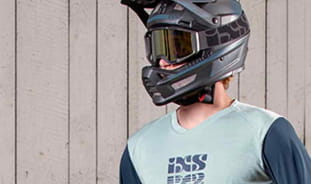 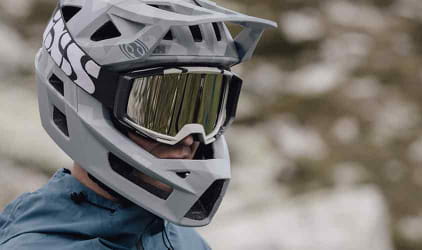 Things to know about iXS

If you'd like to know where the name iXS comes from - it actually has no particular meaning at all, if you want to believe an insider's anecdote. After hours of searching for a good name, the CEO of the Swiss company allegedly decided, "Make it something with X," and that's how iXS came to be the company's moniker.

In the 1980s, bicycle brands were taken over by the group, a successful expansion of the bicycles branch of the group. In 2001, iXS's range, too, was also expanded to include mountain bike clothing and protectors. Since then, the protector and clothing manufacturer has become a household name in the mountain bike world with its high-quality products.

So it is not surprising that the sponsorship list reads like the Hall of Fame of MTB sports. Living legends like Richie Schley and Hans Rey protect themselves with protectors, gloves and helmets from iXS. Stars like Cedric Gracia and Rene Wildhaber are also part of the iXS family, as well as many other international top athletes.

In the mountain bike scene, the manufacturer of protectors and helmets is best known as the organizer of the iXS Downhill race series. Since 2003, the iXS German Downhill Cup races have been held on Germany's most challenging DH tracks. Also, the iXS European Downhill Cup or the iXS Swiss Downhill Cup are essential parts of the MTB calendar. At both events, professionals as well as amateurs compete on their DH bikes. Naturally, the iXS Dirt Masters Festival in Winterberg must not go unmentioned. Since 2006, the Bikepark Winterberg has been the location for one of the most popular bike events every spring. The festival now regularly attracts over 30,000 visitors and over a thousand participants to visit the Sauerland. Various races and contests are part of the iXS Dirt Masters Festival, where amateurs and pros compete in 4x, downhill, enduro and slopestyle. There are lots of other events, such as the incredible Whip Off Contest, various concerts and a large expo area.

The iXS product portfolio not only includes helmets, but also all types of protectors such as knee pads, safety jackets or back protectors, clothing and gloves. Most knee and elbow pads contain the proprietary X-Matter foam. This foam absorbs impacts particularly efficiently thanks to its open cells. Should an accident lead to a collision between your head and the ground, that open structure lets the material absorb the shock. This foam is used in all back protectors and safety jackets, too, additionally, an integrated ventilation prevents your body from overheating during sweat-inducing bike action.

X-Matter material is also put to work in some of iXS's full-face helmets. The X-Matter components serve as an extra cushioning layer between the helmet shell and EPS inner shell, the way it works is very similar to the MIPS system. The strong forces of a heavy impact compress the material in order to reduce the rotational forces that tend to be particularly fatal for the brain.

Mountain bike clothing made by iXS

In addition to helmets and protectors, iXS also offers plenty of bike apparel. Casual freeride tops, cool race jerseys and bike pants show everyone on the trail and in the bike park that your heart belongs to your MTB. Together with the siblings Rachel and Gee Atherton, iXS developed special clothing for racing in downhill and enduro races. There is also a selection of casual clothing that's perfect for city and leisure and also a great choice of clothing for kids and teens.

In our iXS brand store you can find a wide range of trail and full-face helmets, various elbow and knee protectors, protector jerseys and casual bike clothing. You will also find spare parts for your iXS helmet and cool caps. Time to stock up on iXS products that will dress and protect you from head to toe.